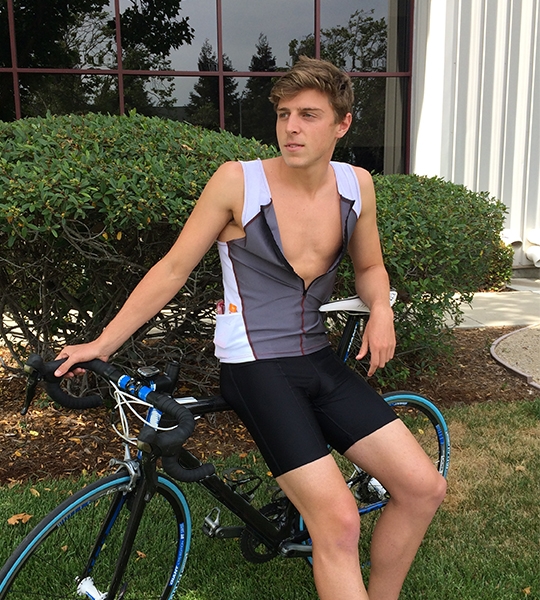 In just 3 years training and competing as a triathlete, Kevin Jervis has managed to place 8th at Collegiate Nationals in 2017, become the first Back-to-Back Winner of the Cal Berkeley Triathlon for his 2016 and 2017 wins, and aims to win both the sprint and olympic distance National races in this year’s 2018 tri season. He is impressive.

We’re lucky to be able to support Kevin as a GH Athlete with our GH Apparel; he’s the perfect fit with the refreshing perspective he brings to competitive athletics. He is extremely competitive, training seriously for the payoff all while being humorous and lighthearted. He is a serious athlete who doesn’t take himself too seriously; thankful for the athletes he is able to train alongside and his family and friends who support him. He is inspirational.

We interviewed Kevin to give you a glimpse into his world of health and fitness.

Credits his growth over 3 years to being Annoyingly Competitive.
I grew up with two younger brothers, so for better or for worse I’m annoyingly competitive. It killed me to come up short in most of the sports I did growing up, so when I found out there was a sport built around “why be good at one when you can be average at three?” (the CP Tri motto my freshman year) I was all for it. I really didn’t start racing until about 3 years ago, and even though I had a strong swim and run background, it took a while for things to come together, and I learned pretty quickly that if I couldn’t become a strong cyclist I wasn’t ever going to race for first.

Sets his goals realistically high
I’m hoping to win both the sprint and olympic distance nationals races this year, because now I’ve got the bug and it’d be awesome.

Knows how to have fun with it all
I like the individual aspect of triathlons, but there really isn’t any substitute for awesome training partners. Sometimes you get hit in the head with a Snickers Bar and ride into a road sign, and other times you’re either verbally berated or encouraged viciously enough to hit that extra gear. Suffering loves company.

Involves himself in his community
Over the past few years I’ve gotten much more involved in the Cal Poly Tri Team, and this year I’ve risen to be part of the officer core. It’s a slippery slope though, at first you’re just going on a few group bike rides, and next thing you know you’re eating 18 donuts sandwiched between a milkman and a pro hot dog eater (shout-out to Tour de Donut 2018). The men’s team is incredibly fast this year (fingers crossed for top 3 in the US) so the fact that I get to train and race with some of the top collegiate athletes everyday keeps me on my toes and is absolutely priceless.

Preaches speed training and hill sprints
I will forever preach speed training and hill sprints. Endurance training makes doing endurance exercises easier, but I only feel myself actually getting faster when I start doing all-out intensity workouts. For swims, that’s 25- and 50-yard sprints, 100m and 200m track workouts or hill repeats, and either sprints on the bike trainer or more hill repeats. I’ll always drink a recovery shake (Hammer Recoverite, vanilla with milk) afterwards and that seems to do the trick.

Knows what gear he likes and why
The biggest thing about the GH apparel is that it’s invincible. I put GH gear through the wringer, especially the cycling bib+jersey, and they refuse to wear down, and somehow they still feel good. Even when I’m not on a college budget, it’s still going to be my go-to training gear.

“Buying triathlon stuff usually means eating ramen for a while, so I have no doubt that without the quality gear and support from GH, I couldn’t compete at a high level in college. Many thanks”